Cent said:
Was at The Watering Hole late night the other night. As if on schedule around 2 a.m. ....

We just watched the silliness unfold and invited frightened pretty women to come sit with us and have a drink or two. As far as I know no one was shot, stabbed, or bludgeoned to death this time.
Click to expand...

Yup, Cent. Go ahead and tell your wife about that part of the tale (wee hours 'tail').

Surely someone would get bludgeoned !
555

Coffee said:
Can you write that and still be PC ?

Or must one denote person ...as in "Groovy, person."
Click to expand...

Sent from my iPhone using Tapatalk

I thought that "Jacks" was exclusively an Aussie term of endearment towards local law enforcement, where'd you pick it up?

@Wombat My auntie was a citizen of Australia and moved to America to marry my uncle Ralph following WW2.
I believe they initially met while my uncle was convalesing as a double-amputee from wounds received during naval operations in the Coral Sea.

I can still recall her "Good on ya, boy" which no American would ever speak in the 60s.

Aunt Faye had platinum blonde hair a là Marilyn and a big smile for everyone.
Years later I had the pleasure of meeting her youngest brother Mel and his son Mel Jr who both worked out of the union shoppe on the docks at Auckland NZ.
I had brought family albums and such to share since my aunt had never seen her brothers or visited Australia since departing.
It was the first time I ever tried snooker.
Obviously I would've never made the ranks.
Thankfully the beer and comraderie was wonderful.

Good on ya mate.
C

I must change my glasses... Saw the above, and spent hours searching for The Nipple Bar, Surin...

Merlin said:
I must change my glasses... Saw the above, and spent hours searching for The Nipple Bar, Surin...
Click to expand...

Let me know when you find it please!


Sent from my iPhone using Tapatalk

Cent, your menu link on the Starbeam Facebook page is not working. Thought you should know.
Our family enjoyed our take away Queslidas and Burgers last night.
Last edited: Jul 15, 2018

Wombat said:
Cent, your menu link on the Starbeam Facebook page is not working
Click to expand...

Works for me.
C

Wombat said:
Cent, your menu link on the Starbeam Facebook page is not working. Thought you should know.
Our family enjoyed our take away Queslidas and Burgers last night.
Click to expand...

Wombat, thanks for bringing that to my attention.

Seems my daughter may have up loaded the menu pages as pictures rather than in text format. I've opened the menu page again, but at the moment cannot change or delete individually from the menu for prices and offerings now defunct. Will speak with her later and see if I can change this back to the way I had it.

Happy to hear you and your family enjoyed our food. Always good to hear feedback.

Scootslande will be at the The Hippy House Bar & Restaurant in Surin City. Friday October 26, 2018. 200 baht entrance fee. Get down and see this great music. Good music, delicious foods, cold beer and mixed drinks, wonderful people. Don't miss the show. You'll be happy you went. https://www.facebook.com/The-Hippie-House-Surin-Thailand-…/…

Here's a song from Scootslande on Youtube for your listening pleasure. 'Go Away'.

Here's another taste of music from Scootslande for your listening pleasure. Come and see the band at Hippy House Bar & Restaurant in Surin City Friday, October 26 2018. 'They Cry'.

Hippy House looking for a cashier

Yeah, around the corner a bit further down (on the soi the Thong Tarin hotel is on).
E

I notice it s now calling itself "Hippie House". It s bang opposite the clinic with the big car park. 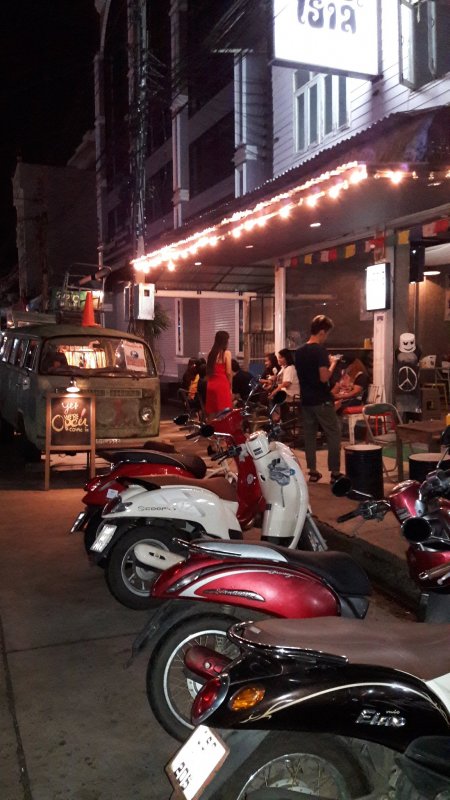 Stopped in to the new and improved Hippy House last night for a look see and a couple beer Lao and to hear some of the live music and say Hi to Dome. Wow! What a difference in the venue change/move. Nice place, though the way to the hong nam takes one behind the bar and into the secret passageway beyond. LOL The place was packed out, and, much to my surprise, it was packed out with like 90% women. Had a pleasant time chatting with some ladies there and a couple lads. Dome's place was rocking. The move is a definite money maker increase I'd say. Loads of people in there. Great music by Dome and his drummer buddy, and a very pretty lass singing on some of the tunes. Nice voice. Good job. And surprise surprise... Dome got a serious haircut! Not so hippy looking any more. Will definitely be a place to stop in when out and about on the occasional Friday or Saturday night.
You must log in or register to reply here.
Share:
Reddit Pinterest Tumblr WhatsApp Email Share Link
Top