The Hippy Bar is no longer just a bar with beers and music. They have upped their game and now serve good tasty foods and mixed drinks, as well as cold beers and great music.

The Fung Folk music is on Friday evening the 20th of July at The Hippy Bar $ Restaurant. Not Saturday. Music starts at 6 p.m. There are some great performers going to be playing. Get down there and have a listen and some fun.

Chalong Bay is a 100% sugarcane rum from Thailand

The duality of vision and passion. Our iconic dream is to create a rum produced from a truly original process, using sustainable production, which binds the traditional French Art of distillation with the fertile cane heritage of Thailand. The Original use of traditional copper imported. From The French country and the distillation process for centuries, the creative craft of the gulf of celebration has produced an award-winning rum in an amazing manner, the original and smooth, giving sense to the perfection of the 100 % Authentic Thai cane. Inner address.

Nice Farangutang show last night attended by about thirty five on the quiet corner of the entertainment district.
C

The Farangutan Band last night at The Hippy House Bar & Restaurant. We had a great time. Lots of people having fun. We'll not be playing out together for a while. Dave the singer is off on holiday for a couple weeks, then I am off to the states for a couple months. January will be the next time we hopefully can play together again.

The other band I play in, the 3FA, will be doing some music on Saturday the 27th October at The Hippy House. Then I am off to the states a few days later.

The Farangutan Band. Mike, Dave and Mon. Always a good time playing with these guys.

The Thai guy playing the drums was excellent, both on the normal drums available there, and the new electronic drum box they have there now. Really makes a difference.

Hangs up on the 4th song for some reason. Just advance it a bit.
C

Hippy House looking for a cashier

Sad songs for the broken hearted on Valentine's Day.
C

Hippy House bar and restaurant rocks. Great music on the stereo, good foods (try the Pad Thai gai), place was full of Thais and good looking gals, and, he now has Budweiser girls to serve the beers. Never seen that. Chang girls, Leo girls, Heineken girls, and now Budweiser girls. Red and white outfits. Very cute, attentive and friendly lasses. AND, now they serve LARGE Budweise's! WTF? Never seen this size beer bottle for Buds. 3 large Buds for 320 baht. Get your pic taken with the Bud girls. LOL Live music started a bit late due to the rain. Band was a bit late.

Latest news, hush now, Dome will be making a restaurant upstairs from the Hippy House. I've no idea when it will start, but that's the plan The best of luck to him. He has loads of Thais coming around for the food as well as the music and brews. Met some nice people there tonight. Best place in town for late night beers, foods and great music. Go around and help support the effort. His place rocks. One guy was telling me Hippy House is his favorite place in town to party and hear music. And he's Thai, but from Norway, speaks no Thai, but has great English. LOL Nice night.

I'd stay longer but tomorrow is the big family party for my wife and my 18 year wedding anniversary. So I'm being a good boy and home early. I don't know how she has put up with me all these years. And longer before we ever wed. LOL

Staff member
Many happy returns for today @Cent- your wife deserves a medal I think. 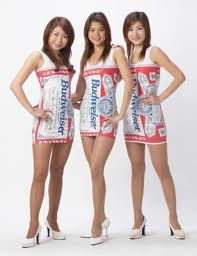 nomad97 said:
Many happy returns for today @Cent- your wife deserves a medal I think.

A Platinum medal for sure. LOL
C

So it was said. There seem to be plenty about in all the bars though.

Cent said:
So it was said. There seem to be plenty about in all the bars though.
Click to expand...

Surin has always flown under the radar on these issues where other areas in Thailand have to use K-Y Jelly.

As for Budweiser. Been 14 years since I chocked one down. It's shit beer.

As for the large bottles of Bud seen them back in the colonies.

Speaking of which, there was a "Cheers" van driving past my house earlier. Haven't seen "Cheers" for years. I thought it had been discontinued.

2nd from right could feed me beer anytime

Yorky said:
Speaking of which, there was a "Cheers" van driving past my house earlier. Haven't seen "Cheers" for years. I thought it had been discontinued.

There are a couple of variants to their ‘Shyte lager’ now, I have been told. I remember when it first came out and the girlies at the Surin night market, were giving away free cans. It was so bad that I gave mine back!

A very rare occasion that I refuse a free drink!!!!